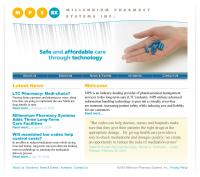 In addition to design services, a static site was delivered so the client could incorporate existing server applications.