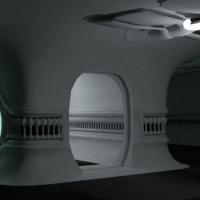 As with many large-scope, independently published games, this one is still in progress. Here I’d like to share my work designing and building a modular environment kit for one of the game’s factions. The requirements list was short and sweet: Sleek and modern, with a monochrome color pallete.

My personal requirements: modular and organic. I also wanted a hint of sinister undertone — that it could quickly become an unsettling place to be.

For the process junkies out there…

Modeling and texture map baking was performed using Blender 2.79 along with a few key and well-crafted add-ons: BPainter’s layering system made life easier when painting the details onto the wall modules, and B2U for getting the completed scene and material definitions into Unity. A handful of add-ons were tested to help manage texture baking but in the end TexTools came out on top. Normal to map Cycles node group was key to baking normal maps.

Early in the project my workstation was Ubuntu Linux based. I’ve since built a new workstation and, while I can still boot to Linux, I’m mostly using Windows 10. In this new environment, the following were essential: Windows Subsystem for Linux; Chocolatey; VS Code. This allowed the continued use of makefiles for scripting repetitive tasks such as image format conversion and creating metalness maps for Unity. Git with the LFS extension was used for version control.

Feel free to reach out via social or email if you’d like to know more about the project or process.